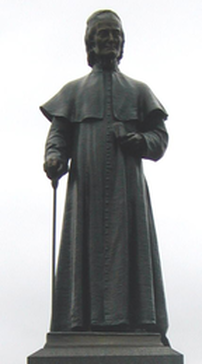 Prince Demetrius Gallitzin first visited this area in 1795. He held Catholic education in high esteem. In conjunction with his goal to establish a strong Catholic community, he felt it was important to provide a solid Catholic education to the children, free from outside influences.  From 1890 to the present, the mission of St. Michael School is to foster and maintain the fourfold purpose of Christian education: message, community, service and worship.

We, as Catholic educators, accept the responsibility to effectively fulfill these goals through which each child's personality and talents are nurtured while living out God's kingdom and message.

Saint Michael the Archangel Parish built its school in 1890 and used it as a parish hall until 1921, when under the direction of the Very Reverend Father Hackett, it was converted into a school. The school contained four classrooms -two grades in each room. The school was staffed by Mercy sisters with Sister Mary de Lourdes serving as principal. The school continued to serve the community of Loretto, providing students with an opportunity to receive a Catholic education.

During the late 1950's the administrators were informed that, due to structural difficulties, something had to be done in order for the school to remain. The decision was made to construct a new school building in the exact area of the old building. On April 11th, 1959 the school building was razed to make way for the new school. In order to maintain classes, the faculty, staff and students held classes in both the church basement and the convent. Then, on May 1, 1959, a ground breaking ceremony was held with the Reverend Father Paul A. Lenz, administrator, turning the first shovel of earth. The building was erected by the men of Saint Michael's Parish under the direction of Ferd Knopp and Leo Soisson. Monies to fund the building were raised through a parish level campaign. As the new school year drew near, the crew worked diligently and the students were able to begin classes in the new building on November 23, 1959.

A ceremony was held on December 10, 1959 to bless the opening of the new school. The Most Reverend Howard J. Carroll, Bishop of the Altoona-Johnstown Diocese, was celebrant for the solemn pontifical benediction and blessing with over 600 people in attendance.